Serious wall tie corrosion problems are affecting millions of homes in the UK. A Building Research Establishment (BRE) report indicates that out of nine million dwellings constructed with cavity walls, two million are experiencing wall tie corrosion or failure and are in need of specialist remedial stabilisation.

If left untreated, seriously corroded ties will fail. If too many ties fail in the same area of a wall, this could lead to a partial or total collapse of the wall.

The symptoms usually include cracks or bulges in the external brickwork or mortar joints caused by wire ties snapping within the cavity, or corroding ties expanding to several times their original thickness.

Wall ties were usually given a bitumen coating or galvanised prior to installation to protect against corrosion. Despite this, age, mortar type, climate and exposure to the atmosphere can all result in the deterioration and eventual failure of wall ties.

The cause of wall tie failure can also be due to a lack of quality control during the construction phase, resulting in not enough ties being installed, or ties being incorrectly fixed or fitted. The environmental conditions often experienced in coastal locations can also add to the premature corrosion of wall ties.

The History of Wall Ties

The cavity wall method of construction was introduced to the UK during the nineteenth century and was primarily implemented to prevent the passage of moisture to the interior of the building.

Galvanisation standards were reduced between 1964 and 1981, meaning that millions of substandard wall ties were produced during that period and it has become apparent that a high number of properties constructed in both the early part of the twentieth century, and in the period preceding 1981, are suffering from serious wall tie corrosion.

Remedial systems can be utilised to restore stability to existing walls damaged by the expansion of corroding steel ties, loss of wire ties due to corrosion, insufficient wall ties, ineffective wall ties or unrestrained masonry.

The first step is to determine the extent of the problem.

To ascertain the location of existing wall ties, the wall is inspected with the aid of a metal detector. The cavity width, type of wall tie, and the extent of any corrosion can be established by a visual inspection within the cavity performed using a boroscope, and/or by the removal of the mortar bed and/or brick adjacent to the location of a wall tie.

At this point we will be able to recommend the best course of action.

Extreme circumstances may require the complete removal of old wall ties but other less disruptive techniques are now commonplace. All work is completed from the outside with brickwork repairs carried out to a high standard, matching the original as accurately as possible. 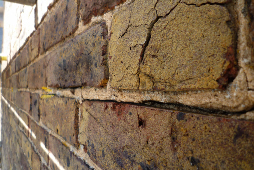 Visible symptoms of wall tie corrosion on the outer leaf

The result of corrosion on a wall tie 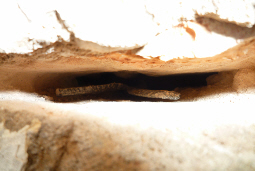 Existing wall tie exposed prior to being isolated or removed 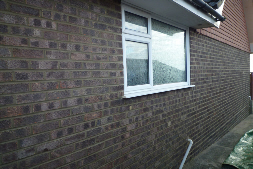